Time is not on my side as I race the setting sun. I’ve been cooped up all day at work and now I’m battling heavy Southern California traffic. I frantically weave my Jeep around slower cars that are trying to merge in front of me from several Interstate arteries. I exit toward the beach, roll down my window, and take a slow deep breath of calming salt air. My mindset shifts to fishing.

I only have about an hour of daylight left and I want to get bit so I decide to target some spotted bay bass, also called spotty or spotties. As the sun begins to dip below the horizon, the water reflects the fiery sky turning it into an oil slick swirl of colors. Everything is still except for a few white egrets hunting on the flats. It’s my favorite time of day, the “magic hour,” where smarter, bigger bass come out of their daytime hiding spots and start to cruise around freely. From my experience spotted bay bass tend to feed heavier at first light and sunset because they have two types of light sensitive cells in the retina called rods and cones. This gives them a major advantage over bait fish, or forage fish, that only have cones, which makes it very difficult for them to see in low light and nighttime conditions. The eyes of a predator bass, can adjust faster to the change in light than a bait fish giving them the upper hand during these transitional times of day when the sun is rising and setting. After dusk into the night, bass continue to hunt the vulnerable inactive bait fish. The spotted bass’s nighttime vision is basically black and white so an all black lure gives the predator the best profile to target. Sure, you can catch bass at anytime of day but this is when I’ve found them to be the most active.


As I climb down the rocky bank to the water, I notice some exposed eel grass. With the tide heading out I tie on a weedless swimbait, take a long cast up current, and begin a slow retrieve anticipating the bass following my lure back to the shoreline. It’s almost dark now and all my senses are heightened. I can feel every blade of eel grass as my lure passes over it. I envision this stealth predator waiting to ambush its prey, its spotted camouflage stripes blending perfectly into the eel grass like the dark stripes of a tiger masking its silhouette as it slowly stalks its prey through tall grass. I’m cranking the reel methodically when suddenly my swimbait gets slammed. The hit is so hard it shoots up my rod like lighting as the bass rips line out. The thrill of that first bump, hit, and initial hook up never gets old. That’s how I ended up addicted to chasing bass down as often as possible. In my eyes, pound for pound, spotted bay bass fight harder than other bass in their class. Battling an average 1–3 pound spotty on light tackle can be really exciting. Like all fishing, though, there are always going to be days that are slow but generally speaking when you target spotted bay bass you’ll catch a higher number fish, which is super satisfying. This species of bass is primarily targeted as catch and release. So in this time of prevalent digital media, when you document and post your personal best catches make sure not to reveal any recognizable landmarks in your photos or your favorite spots might become pressured by other anglers.

When I was learning how to fish this Southern California fishery, I devoted 5 years to exclusively fishing spotted bay bass. It was the perfect game fish to hone my skills and techniques while experimenting with different types of lures and retrieves. Then I transferred what I learned in the bays and stepped it up to the kelp beds for a bigger class of bass like calicos. The other great thing about these spotted bay bass is that you can take your general knowledge of fresh water bass fishing and use those same techniques and lures in saltwater. Lures, like swimbaits, creature baits, grubs, slugs, spinner baits, crank baits, and umbrella rigs, all work in different scenarios. In essence bass are bass no matter how you slice it. Spotted bass are ambush predators and eat a wide variety of bait fish in the bay, like sardines, smelt, grunion, mackerel, red tuna crabs, razor clams, and ghost shrimp. When bass are feeding heavily and you catch one, a lot of times they cough up what they were just eating, so take note and match the hatch.

It’s a good idea to document the fish you catch in a field notes journal and look for similar patterns that you can replicate for future fishing excursions. For me it’s more about the science and process leading up to the hunt, knowing when to go and how to read the conditions. The reward is making a perfectly placed cast and, after an intense fight, landing a beautiful fish. When all that comes together it satisfies my obsession for the day but leaves me craving more and already making plans for the next adventure. ~photos & words Scott Wyss 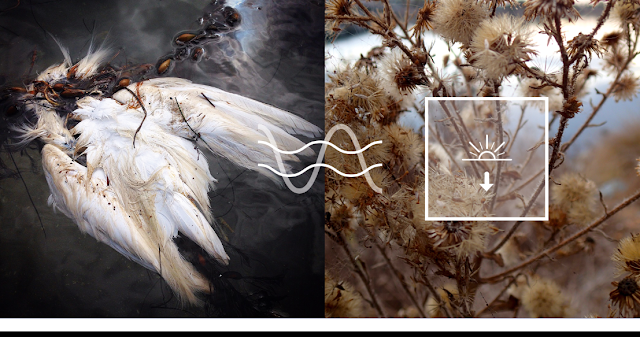 The "Stay Bit" series of illustrations, prints and wood sculptures is an homage to all my saltwater rituals. The design series revolves around the culture behind a waterman. Watermen have skills in multiple aquatic sport disciplines such as surfing, fishing, kayaking, boating, bodysurfing, clamming, crabbing, and lobster fishing. These limited edition serigraphs honor the skills you achieve when you dedicate a lifetime passion to the ocean, bay and inner estuaries.

{TOOLS OF THE TRADE} {Special Thanks}
A special thanks goes out to Kristin Adams from Tony's Picture framing for helping me mount and frame all the pieces and Yomar for inviting and hosting the gallery opening at his Studio space! 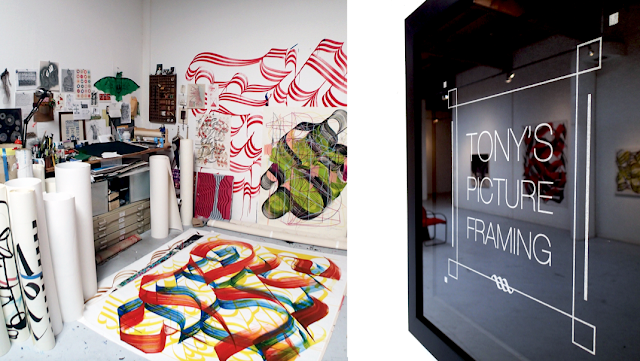 A collaboration of abstract calligraphy and experimental screen printing. This series of five limited editions prints plays with layering and a playful intuition between shape, texture and letterform. Each print is unique but the use of color and form create a cohesive system. Each serigraph is signed and numbered by the artist. These can be purchased in a deep floater frame or unframed, dry-mounted on foamcore.

• an organized whole that is perceived as more than the sum of its parts
• the idea that natural systems and their properties should be viewed as wholes, not as collections of parts 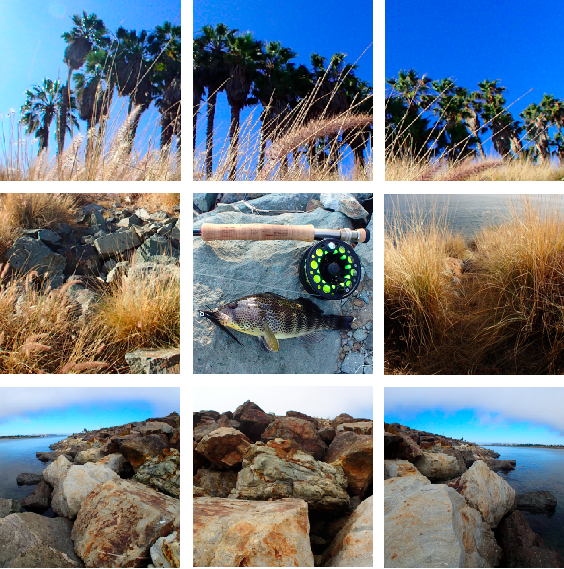 ASPHALT TURNS INTO GRAVEL AS I SWING INTO THE LOT NEXT TO THE RIVER. My Jeep, Betsy, relishes in a brief off road moment kicking dirt and rocks under her chassis. I roll down my window and take a deep breath of salt air as the waters edge comes into focus. I park and hike down the nearest path to check out the water conditions and see what is going to work best for today. Its almost a 6.5 high tide and there is no floating kelp or exposed eel grass. The wind and tide are perfect today for fly fishing. I tied this all black Clouser Minnow Fly to target Spotted Bass and today looks ideal for it.


Fly fishing takes time and patience because some days you may put in a thousand casts for just one fish. It is a humbling experience if your used to bass fishing with artificial lures and a baitcaster. But as your casting away and hiking up and down the rocky banks of the river you get to observe subtle glimpses of nature unfold in front of you. White egrets in the flats stalking their prey while delicate Turns dip and dive along the surface of the river. Crabs creep in and out of the cracks along the rocky bottom while big corvina cruise by your feet like ghosts. Each path you explore through tall golden marsh grass reveals hidden clues to natures ebb and flow of life. I come across the remnants of bird who met its demise earlier from some stealthy predator lurking in the rocks. Its pristine body with white feathers folded perfectly against the jet black rocks engages your mind to try and piece together this "crime" scene. Fishing is more then just catching fish, it is an opportunity to engage with nature and the creatures we respect. If you collect everything you experienced that day as a whole its more then just the one fish you were lucky enough to catch. ~Photos and Words Scott Wyss  © 2017 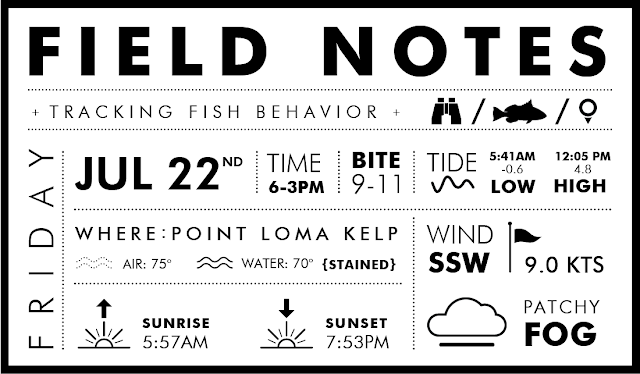 
I have been collecting data for the last eight years. I keep track of everything from lure used, weather, water temperature, retrieve speed, water quality, wind, moon phase and tide. Fishing is a lot of luck, but there is a definite science to it. I can refer to my Field Notes when I'm trying to catch fish at a later date and improve my chances.
Posted by Bows & Arrows at 12:58 PM 1 comment:

___________________
I am near sighted, my up close reading vision is perfect but anything at distance is fuzzy and out of focus. On occasion I where prescription glasses when it is imperative that I can see; i.e. driving or watching a foreign film with subtitles. Often when I walk into town friends will wave at me from a distance to say hello but they are all but a blur to me so I put my head down and continue walking. I don't know if it is some random person or someone I might know. I usually get a text message later stating that they saw me today and they waved but I must not of seen them. Oh I saw you, well kind of, if a blurred face waving from across the street counts.

I have tried to where my glasses all day but everything is too crisp and clear, too perfect and vibrant for me to process at one time. I think the world looks better in soft focus sometimes. I can focus on what is in front of me and let everything else dissolve into background noise.

In the world of fishing you can either "Sight Fish" or "Blind Cast". When sight fishing you rely on water clarity, birds working, or bait fish boiling on the surface. To me this is easy to fish because you know exactly where the fish are you just need a good cast and natural presentation. I prefer blind casting, it takes far more skill then sight fishing. If you can not see the fish you have to imagine their world and think like a fish. You have to understand subtleties like water currents and what direction they might be facing. Study their environment and look for structure and ambush spots. Then after absorbing your surroundings you can cast the lure where you think there might be fish. Its about searching, an unseen clarity where you blindly unlock their world. When you finally figure it out and get into fish it is far more rewarding. That is where the true craft or art of fishing resides. ~ Photos & Words: Scott Wyss